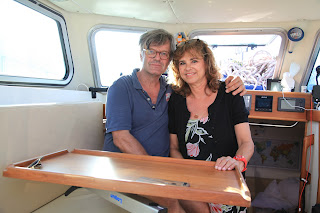 We have known each other for a long time, since 1980 we have been a couple. Experienced  each other's studies.
Machiel is a work- and organization psychologist, he worked for a long time in consultancy and interim management. He has had his own company in interim management.
Liselotte has worked in de GGZ (clinical setting) as a family therapist. In recent years in a health center where she was the therapist of mild to moderate psychological  complaints.
Liselotte is a textile-designer/interior-stylist as well.

We are the father and mother of two sons: Martijn (1990) and Bart Jan (1992), who are adults and both stand on their own. Martijn is married to Nikki and since may 2018 they have been living and working in New York for two years. Bart jan lives and works in Amsterdam.
Because of the work of Machiel we and the kids lived in Aruba in 1995-1996, during which time we bought our first own sailing ship Lotje Twee (Centurion 40 ft Wauquiez).
With our ship Lotje Twee we made our first world trip, in 1998-2000. Our sons were then 6 and 8 years old, and we have taught them for 2 and half years.
We left the Netherlands, through Spain, Portugal to the Canary Islands and Cape verde. We crossed the Atlantic Ocean to Barbados, sailed around in the Caribbean, visiting many islands; the Dutch Antilles and Aruba as well; South-America: Venezuela; Central-America: Guatemala, Belize, Mexico; North-America: Florida Key's, Miami. Through the Bermuda Islands and the Azores back to the Netherlands. A fantastic experience, we have said to each other, we want to do that again!

And now after our first trip, many years later, we're leaving again. Jobs have canceled and our house has been sold. We bought a pied a terre last year, which we rent out.
And with another sailingship Pitou, a 51 ft one-off.
The way it looks now, we want to travel for an indefinite period of time and we feel incredible that we can start this adventure again!

On August 4, 2018 we left from Amsterdam-The Netherlands.
Our dream and big wish:
SAILING AROUND THE WORLD!